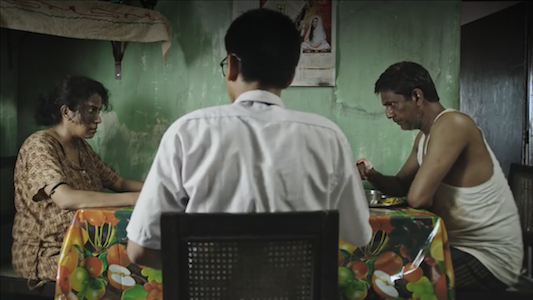 Film Companion has initiated a weekly Sunday Showcase program to celebrate pathbreaking short films. On May 31, the website screened Abhiroop Basu’s Meal on their YouTube channel. The film, which has made it to several film festivals, has earned numerous accolades and was India’s entry at the Oscar-qualifying Odense International Film Festival, Denmark. Its most recent recognition was when it earned an award in the short film category at the Indie Meme Film Festival which screens thought-provoking South Asian films and promotes socially relevant independent cinema.

The film, spanning just about 11 minutes, centers on a family of four. Although the story unfolds sans dialogue, whatever actions and emotions surface within that limited period of time are sufficient to give a lucid picture of how the family functions.

The opening scene is that of a pregnant woman (Ratnabali Bhattacharjee) cooking a meal in the kitchen. Her face is bruised in a manner strongly hinting towards domestic violence. She looks visibly angry, disturbed, and hurt. Totally lost in her thoughts, she has around her the aura of a suppressed woman. The hissing and rather annoying sound of the pressure cooker adds to the air of suffocation and frustration.

The husband (Adil Hussain) has rage and impatience written on his face. The bandage around his hand with stains of blood makes one wonder if he is the one responsible for the scars and blemishes on his wife’s face. Fuming out loud, he frantically stuffs things into a suitcase as though he is about to leave the house. In his clumsy movements, he knocks things around.

The dynamic of the relationship between the husband and the wife is, without an iota of doubt, hostile. Caught in this quagmire are two other beings. There is an old man (Arun Mukhopadhyay) slumped in a wheel chair, showing signs of utter helplessness. Also, there is a young boy (Avishek Jain) who sneakily observes what is going on around him while getting ready for school. Fear and nervousness envelop him.

The discord that brews within the family is just a microcosm of a much wider tapestry that wraps the nation, for we sense a clear indication of divide. While chants praising a leader are heard in the street outside, a contrary action is also juxtaposed as the news bulletin reports of chaos and disturbances and Section 144 being imposed.

A surprise awaits the viewer as the climax at the dinner table sends a chill down the spine. Feelings of revenge, anger, fear, and regret are all encapsulated here in a firm mould.

The narrative flows without dialogue, and it’s the visual depictions that feed the viewer’s imagination, hence giving one the liberty to interpret the situation. Meal might make one ponder that it is not just the basic requirements of food, clothing, and shelter that make life complete.

Although not a lavish layout, the family does have a meal to eat. Even though dirtily and shabbily dressed (except the young boy who’s in a decent school uniform), they are clothed. Be it a ramshackle, cluttered accommodation, there is at least a roof over their heads. However, it is the absence of peace, happiness, and trust that leaves a big vacuum in their lives and creates the turmoil. And what adds to the depressing state of affairs is the thought that beyond the walls of that dilapidated house lies a world where uncertainty looms large.

Meal blossoms with a mature handling of the theme by Abhiroop Basu, who soaks the film in unbelievable realism. Every moment feels so authentic that one literally experiences a sense of anguish and discomfort watching the dysfunctional family.

The absence of music is compensated for by a series of natural noises like the voices that come from outside, the news on the television, and the sound of things being knocked over in the house. The deep breaths, the sighs, the panting, and the loud unintelligible outburst at the end contribute towards the eerie feeling that pervades perennially. Basu himself said in an interview that the intent to incorporate natural sounds was to keep the ambience as organic as possible and to keep the realistic part of the film intact.

Meal is the teamwork of a very talented star cast. The immensely gifted Adil Hussain and Ratnabali Bhattacharjee deliver their master strokes. They stand out as the couple whose unexplained, unhealthy relationship shapes the destiny of the family. Arun Mukhopadhyay and Avishek Jain also act with great finesse. Without a single line of dialogue, the characters totally rely on their body movements and their facial expressions. They emote impeccably and create a transparency through which one gets inside their minds.

With fine artistry, Meal delicately blends superior performance with a narrative that creates a vision of a bleak future. If I were to summarize it in a sentence, I’d say that the film is realistic, concise storytelling, reaching a level of brilliance extraordinaire!

(This article was featured in Women’s Web )