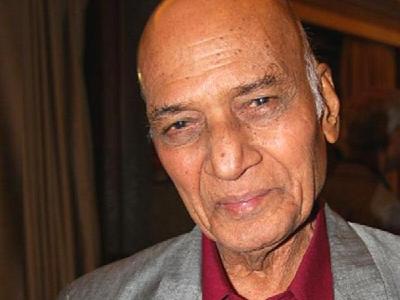 In less than a week, India lost two of her gems. First it was talented actor Vidya Sinha, and then it was legendary music composer and Padma Bhushan laureate Mohammed Zahur Khayyam Hashmi. Popularly known as Khayyam, the rich granary of Indian music contains his melodious creations that posterity will treasure down the ages.

It is always a daunting task to write about any individual who has attained great heights and contributed immensely to the world, lest we fail to do justice to his or her merit. Hence, in sheer humility, I attempt to reflect on my thoughts about Khayyam Saab, whose music has appealed to me since the time I remember listening to his soulful melodies.

Khayyam’s musical journey began at the age of 17 when he served as an assistant to Punjabi music director Baba Chisti for a brief period. Then after a stint in the army during World War II, he went to Mumbai to live his dreams of embracing music as his world. It is interesting that he debuted in the music industry as Sharmaji when along with co-composer Rahman Varma, the duo composed the music of Heer Ranjha in 1948 under the banner of Sharmaji-Varmaji. It was after Varma migrated to Pakistan post-partition that Khayyam took up the reins to be an independent composer with his first major break in the 1950 film Biwi.

When great talents meet, what results is a masterpiece. Khayyam Saab gave life to the words penned by brilliant lyricists like Sahir Ludhianvi, Shahryar, Majrooh Sultanpuri, Kaifi Azmi, and Gulzar. The resulting compositions were spontaneous and flawless and were a treat to the senses. The music of Khayyam that I grew up listening to was from Kabhi Kabhie, Umrao Jaan, Trishul, Noorie, Bazaar, and Thodisi Bewafaii. Or to be more specific, the songs from those films were among my favorites.

What made Khayyam Saab so dear to music lovers was his range, his versatility. For instance, Kabhi Kabhie Mere Dil Mein, vocally rendered by Mukesh and Lata Mangeskhar, was based on a simple tune, and so was the peppy number Gapuchi Gapuchi Gum Gum from Trishul sung by Nitin Mukesh and Lata Mangeshkar. On the other hand, In Aankhon Ki Masti and Dil Cheez Kya Hai sung by Asha Bhosle in Umrao Jaan were soaked in the fine grammar and technicality of Indian classical music. The exquisite music in this film brought for Khayaam Saab the National Film Award for Best Music Direction. Again it was a different genre when a splendid ghazal Phir Chiddi Raat came alive in the film Bazaar.

Khayyam was conferred the Filmfare Best Music Director Award twice for Kabhi Kabhie (1977) and Umrao Jaan (1982) and the Sangeet Natak Academy Award for creative music in 2007. What immediately comes to our minds when we hear his name are the tunes that millions have sung and hummed over the ages. But behind the genius of the man who created magic with his music was the altruistic side that deemed his status as a wonderful human being. While celebrating his 89th birthday, the music maestro announced the formation of the Khayyam Jagjeet Kaur KPG Memorable Trust and pledged to donate his entire wealth of rupees 10 crore (valued then at USD 1.4 million) to support the cause of budding artists and technicians in India.

Classical Greek philosopher Plato beautifully summarizes the power of music: “Music gives a soul to the universe, wings to the mind, flight to the imagination, and life to everything.” The music of Khayyam so aptly fits into this description. His music is a whiff of fresh air, the fragrance of which lingers on. The pleasant melodies nourish the inner state of the music lover, carrying one to a realm that transcends time and space.

Rest in Peace Khayyam Saab, you will be very dearly missed!

(This article was featured in TODAY’S BEST section in MOMSPRESSO)