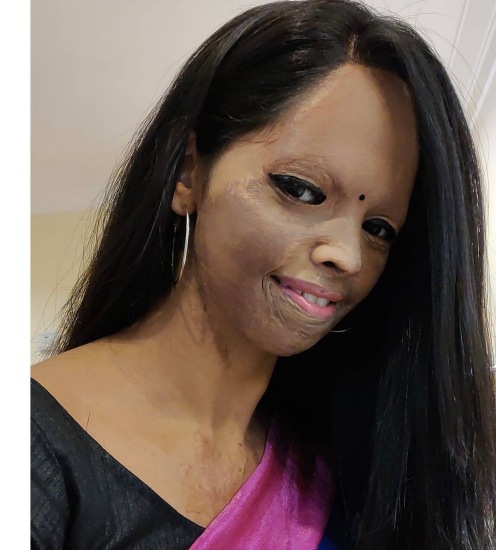 I was left speechless in the silence of the moment. A variety of emotions engulfed me, and I was in awe and full of admiration for Laxmi Agarwal, who talked about her life’s journey in an episode of the series From The Other Side hosted by Raga Olga D’Silva.

Flashback 15 years ago: The nation was shaken by this heartbreaking incident when Laxmi, then a 15-year-old, faced an acid attack. A man much older to her had committed this heinous crime in Delhi’s Khan market after she had rejected his proposal to get married. The trials and tribulations that she has faced have made her a brave young woman, and Laxmi now stands undeterred with poise and dignity to embrace life with faith and fortitude!

Laxmi talks about women empowerment and about the ills that pervade the society. However, her ideas are not layered in any philosophical innuendos. They are thoughts that center around our day-to-day lives, truths that are already known but which need to be reflected upon and realized. She puts forward her thoughts in a simple yet compelling manner, and that is what makes the conversation hold depth and value.

What creates the acid within?

The interview is titled “The Acid Within”, an apt metaphorical phrase to signify the hatred that one carries in his or her heart. Raga asks Lakshmi where this acid in human beings comes from and what is it that they carry with them that makes them capable of such acts.

Laxmi says that what is more dangerous than the actual acid are the feelings of hostility and animosity that brew within an individual, manifesting in toxic behavior. She attributes that to one’s upbringing and believes that children follow in the footsteps of their parents, easily picking up on what adults do and say. Hence it is extremely important for elders to set a good example for their posterity so that negative, hateful vibes are not passed on downwards.

How can women get the respect which they rightfully deserve?

A valid point is raised when Laxmi says that the issue of respect for women does not need to be addressed separately. Respect will automatically come in the moment boys and girls are treated as equals by their parents.

Discussing societal problems at length, Laxmi voices how daughters should not be considered as a liability. When a girl child is born, parents should think more about educating her so that she can be independent rather than thinking about her dowry or marriage.

Who is the society that we talk about?

Laxmi states that the society we keep blaming is nobody else but us ourselves. Each of us, as a member of the society, has a moral and ethical responsibility. Together, we can make a difference by supporting each other. We need to identify the right and the wrong.

It is sad that when a crime is committed on a girl, she is considered an even greater burden. Referencing her own traumatic experience, Laxmi recollects how following her attack, she was called “bechari ladki” by acquaintances who came to see her. Rather than thinking about her recovery and well-being, they were more concerned about how she would get married with a tarnished face. That was a time when she needed moral support, but she felt that she was instead being pitied.

The need for openness and discussion

With sadness, Laxmi shares how she had felt the pangs of rejection and had contemplated taking a drastic measure. However she stepped back from that act when she thought about the suffering she would inflict on her family, who was already going through such pain. She says that she had committed a mistake by not telling her parents about the man who had stalked her. And if she were to end her life, she would have made an even greater mistake because that would have destroyed her family completely.

Citing her own example, Laxmi makes an earnest appeal to both parents and daughters that they need to be open with each other and have a level of understanding between them. Many tragic events can be avoided if problems are discussed with a parent or any elder who can help and advise.

How did she get the strength to endure the pain, both mental and physical?

With candor and honesty, Laxmi speaks about how life has taught her to understand unconditional love and learn the truth about human behavior.She admits that at times, we make a wrong judgment with regard to relationships.

It is not a pleasant revelation when we discover that those people who all along we have considered to be our world are not the ones to stand by our side in times of crisis. Continuing in the same line of thought, Laxmi discusses how rejected she felt following the incident when many people left her. It was only her parents, her father’s boss, and her lawyer Aparna Bhat who constantly had her back and wanted to see her come out of her trauma. She is indebted to them, for they were the people who gave her the courage to fight and the will to live, and this love and emotional support gave her the strength to endure the pain.

Laxmi dislikes the word “victim” and calls herself a survivor. She says that although her attacker tried to destroy her and silence her forever, he did not succeed. The incident has only made her a stronger human being, and that itself is a big failure for him. She has fought the battle and has come out victorious. Standing with her head held high, she has nothing to hide. Her attacker is the one who needs to be ashamed of stooping to such a level and resorting to such an inhuman act.

A winner of the International Women of Courage Award (2014) and the International Women Empowerment Award (2019), Laxmi is now a motivational speaker. She delivers lectures to boost the morale and confidence of many like her. She regularly counsels the survivors of acid attacks, rape, domestic violence, and similar issues. The Laxmi Foundation, which was launched by Laxmi, is dedicated to acid attack survivors and all those who have been the targets of violence and repression.

Expressing her thanks and gratitude to Meghna Gulzar for making the film Chhapaak, Laxmi says that the film is not just a tale about her life but also a story which draws awareness to a cause. It is the voice of all women who have been subjugated to any form of attack and have come out as the winners of those arduous struggles.

The conversation ends on a very positive note as Laxmi emphasizes how important it is to spread love and compassion and not the acid within. We cannot ignore the fact that we will see negativity around us, but the choice is entirely ours. We need to go past these negative vibes and be positive ourselves. She shares the way in which she lightens her mind and heart by writing down the thoughts that bother her and suggests that to others as well.

Laxmi believes we can make a big change by communicating with people we love and care about and by providing a patient ear for anybody who wants to confide in us. At a time like this when we are in the grip of the COVID-19 crisis, staying in contact with our near and dear ones can be very therapeutic. Now is the hour to reconnect with those people that we have not been in touch with for a while, and we can gladden our hearts by reminiscing good times.

A living example of patience, courage, and persistence, Laxmi is indeed the “warrior woman”, as Raga calls her. After a tragic situation that completely changed her life, she has evolved into a mature human being. She has a five-year-old daughter and says how with all their innocence, little children can also teach us a lot. Laxmi feels proud that she too has learned a lot about love and acceptance from her child.

Laxmi’s philosophy of life is to live in the moment. She abides by the maxim that we need to seek our own happiness and advises that if we look at those who are less fortunate than us, we will realize how blessed we really are!

( This article was featured in Women’s Web )